Pete Fountain was an American music legend when my wife Pat saw him weekly in the executive offices of the New Orleans Hilton. She had returned to her position as the administrative assistant to the Hilton general manager following her marriage to me, the co-author of the Insiders’ Guide to New Orleans. Pat’s friendship with Pete led to one of the most memorable nights in the history of my family.

Pat had been in the Hilton executive office for the initial construction of the hotel towers in 1977 and had returned for the extensive Riverside addition in 1983 that made the New Orleans hotel the then-largest hotel in the South. Pat was thus well known to Pete Fountain and his manager Benny Harrell, who had been associated with the hotel since its opening. Pete Fountain’s Jazz Club would remain a Hilton mainstay until it closed in 2003 due to Pete’s (age 73) declining health.

In the fall of 1983, however, when my wife invited her new in-laws to the Pete Fountain show in the Hilton, Pete at age 53 was still in his performing prime. My mother and father remembered Pete from his performances on the Lawrence Welk ABC television show and other solo performance spots on the popular TV variety shows of the 1960s and 1970s. My sister Rita pictured Pete as a frequent guest (56 times) on The Tonight Show starring Johnny Carson and from some of the 42 hit record albums.

Pat, a native New Orleanian, related to Pete as a fellow native who had attended her same high school. Pete, class of 1945, was in the Warren Easton Alumni Hall of Fame. Pat, class of 1965, had been the homecoming queen.

Pete, as a gifted clarinetist noted for his sweet fluid tone,left New Orleans for a featured

spot with the hugely popular Lawrence Welk orchestra. His roots in jazz and Dixieland, however, did not suit the traditional Welk arrangements. When Pete “jazzed up” the Christmas carol “Silver Bells” on the 1958 live-TV Christmas show, despite Welk’s instructions, Pete was not renewed for the 1959 season.

Back in New Orleans, Pete played with the Dukes of Dixieland and then led bands under his own name. By spring of 1960, he had his own jazz club on Bourbon Street in the French Quarter, and every movie and television star who came to New Orleans made a stop at Pete’s club. Al Hirt, the famed New Orleans trumpeter, had his jazz club down the same street from 1962 to 1983, so the public liked to imagine a rivalry between Pete and Al. They, however, were the best of friends, performed in each other’s club, and made many record albums together. If you saw one perform, you had to see the other to make your New Orleans jazz experience complete.

As a favor to Pat, Benny Harrell, Pete’s manager and son-in-law, booked our party of five at a ringside table for Pete’s late show. He understood that the visit was Pat’s first encounter with my parents and sister, so he wanted to help her impress them. The stage in the club is small and intimate within the arc of the café tables. Benny personally escorted our family to the table and our drink orders were immediately taken. People observing the VIP treatment must have wondered who these people were. That stage-front table was where you might expect to see Sinatra, or Dean Martin, or Tony Bennett and guests.

With an unexpected close-up view of Pete and his great fellow musicians, the show was magical. From classic jazz and Dixieland, to spirituals and show tunes, the pace of the performance had layers of musical satisfaction. Pete’s introductions and comments made our party feel like we were visiting in his living room and that the musical selections were spontaneous. The audience must have felt it, too, because they demanded three encores. The selections included our favorite Pete Fountain ballad, “Do You Know What It Means to Miss New Orleans?” 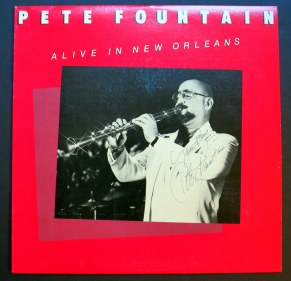 As soon as the show ended, Benny was at the table with gift albums for all five members of our party. Then he shocked us by asking us to stay seated until the band cleaned up from the sweat of performance.

“Pete has invited you to visit with the band in their dressing room. He will sign your albums there.” He also told us that he had taken care of the check.

The dressing room was surprisingly large with the look of a luxury hotel suite. Pete could not have been more cordial and generous. He hugged the women, shook hands with the men, and praised Pat for her friendship and professional support. The musicians also interacted with the family and did not seem in a hurry to leave. Pete’s gift was perfectly orchestrated, and our family left with autographed record albums and treasured event memories that would last a lifetime.

Pat resigned her position at the Hilton in 1985 to follow me to North Carolina where I would write novels, biographies, and screenplays. That June, the Hilton gave Pat a classy going-away party with a gourmet cuisine buffet and many gifts. Two gifts from the hotel were framed posters featuring Pete Fountain. One, “Cookin with Jazz” (22 x 24) showed Pete with the great chef Paul Prudhomme. 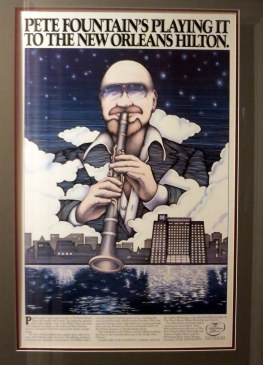 Another framed poster (24 x 35) titled “Pete Fountain’s Playing It to the New Orleans Hilton” was an artistic rendering of Pete against the hotel background.

Pete’s personal gift was a 6 x 8 charcoal portrait that he signed, “To Pat and Monty, Much Love, Pete.”

In 1992, the City of New Orleans governmental council conferred the title of Honorary Citizen upon us. The framed certificate and the mementos of Pete Fountain are attachments to New Orleans that will never fade.

Our friend Pete Fountain died at the age of 86 on August 6, 2016. We immediately set out to create this blog as a tribute of thanks to him for his great musical talent and for his personal generosity to us.