When my wife Patricia Joynes sees a morning fog or the beginning of a crimson sunset, she abruptly leaves the house to submit to her passion. She is a nature photographer.

Years ago, when her 35 mm film cameras and her role as family event documentarian became obsolete, Pat turned her attention to nature photography with a small Canon Power Shot S110 digital camera. Her focus was on the Appalachian Mountains near our home around the Blue Ridge Parkway for its natural beauty aesthetics.

Her first published credits were in books and journals, but her Blue Ridge photographs became recognized in the Town of Blowing Rock, North Carolina annual calendars (2015, cover in 2016, and three pictures in 2017) and the annual Blue Ridge Parkway calendar (2017, 2018). 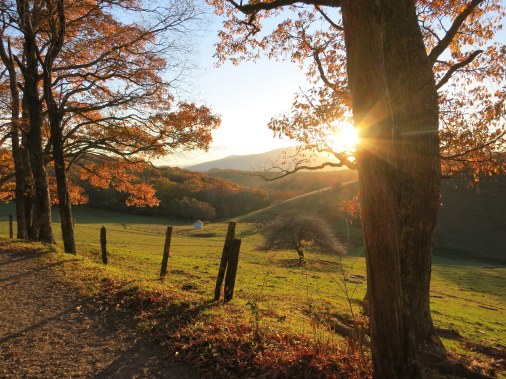 Pat also published annual family calendars of her nature photos with aphorisms by me in 2016 and 2017. By that date, the edited file of her Blue Ridge-centered photographs exceeded 10,000 images!

In early 2017, Pat asked me, a published poet, to write poems inspired by specific photographs. We were both amazed at the collaborative results as the first poems emerged. The titles give clues to the content: The Puddle Portal, The Sanctified Bridge, Split-Rail Fence, and Solitary Bench. Week after week, as Pat presented me with other photographs, I wrote matching poems. By mid-September I had completed 29 of them!

Here is a sample photo and poem from the book.

Before there were human eyes to see

there were a millennia of dawns

creation unfolds in waves of light,

and time is a cycle of the sun

that produces growth and the promise

of life in its regular passing.

What was it like to be the first to see

the distant waves of an evergreen sea?

What was the valley fog assumed to be?

And what monsters did they prepare to flee?

Primal emotions are felt in all ages

as the wild universe is explored.

in a landscape bereaved of doors.

Rejoice that the search for tomorrows

is still the possibility of today.

Become the first to reach the mountaintop

and see its natural wonders on display.