When James Redfield made the concept of synchronicity clear in his novel The Celestine Prophecy, people all over the world began to recognize it in their personal lives.  The ostensibly chance meeting between a classical music composer and me is a great example of synchronicity at work to achieve significant results.  In the summer of 2006 a native North Carolina composer and concert pianist named Edmund Barton (Bart) Bullock, who has lived in France since 1978, was staying in a donated mountain cottage near Boone to practice his piano concerto for scheduled concerts in 2007.

A reader of The Celestine Prophecy, Bart felt a sudden and strong urge to obtain a copy of the film adapted from the book.  A few nights after the viewing the movie, he was at a dinner party where he described the unusual urge to his tablemates.  One of them told Bart that he had recently been on a quiet Blue Ridge Parkway hiking trail when he encountered an acquaintance, Pat Joynes.  In the brief conversation, Pat mentioned that her husband (me) had his book The Celestine Prophecy: The Making of the Movie published. He told Bart that I lived in the area and that an introduction could be made to bring us together.

Telephone conversations led to informal dinner parties where Bart played his Appalachian Concerto privately for us.  Then Pat and I attended a summer concert where Bart performed his own compositions with a chamber group, and we obtained copies of his CDs.  In turn, Bart read my four Booker Series novels and the Celestine movie book.

By early 2007 Bart and I felt that the synchronicity of our meeting should lead to a classical music collaboration.  We decided on the form of an oratorio for four featured soloists, chorus, and symphony orchestra.  I went to the Hayes School of Music library at Appalachian State University to study the libretti of oratorios; and by December 2007, I had written the libretto for The Awakening of Humanity in six movements.

In early 2010 the Western Piedmont Symphony Orchestra and the Hickory Chorale Society became the initial financial supporters for Bart to compose our oratorio.  Public arts agencies and private donors would make up the balance of the commission, and our premiere target date was April 2012.  And then the recession decapitated the arts funding agencies, and all the commissioning support that we anticipated disappeared.  Nevertheless, Bart completed the first two movements of our oratorio, and the music was wonderful.

Bart returned to the US from France twice to work through lyric changes in the second movement, and I had to rewrite entire passages of the poetry to fit Bart’s music.  Trust me, I never felt so inadequate in my writing life; but through Bart’s patience and encouragement, I actually improved on the libretto.  I also learned that poetic meter on the page is not the same as beats in a piece of choral and solo voice music.

With the libretto and the music for the first two movements available to share, Bart’s colleagues in France rallied to support the completion of the oratorio and its ultimate performance.  The Toulouse Conservatory of Music, a center for classical music in France and all of Europe, endorsed our oratorio project and offered an exchange of musicians and singers with an American music school to facilitate its performance.  The emerging possibility is for as many as three performances in France at world-class venues and two performances in the US.  The Franco-American cultural exchange, however, will again depend on financial underwriting by both institutional and private sources so that Bart can complete the composition.  The hope is for a full score by June 2012 with orchestrations soon to follow, and a premiere and subsequent performances in February and March 2013.

Pat and I are among those who consider Bart a musical genius as a composer and as a pianist.  You can see and hear him play his own compositions with symphony orchestras, chamber ensembles, and in solo recitals at www.edmundbartonbullock.com.

When the funding for The Awakening of Humanity dried up, Bart returned to concert performing and commissioned composing, and I wrote two books that were published in 2014 and 2015. There was, however, interest in the completed score of the first two movements, and they were performed three times (January and July 2015) in France by the Ensemble Vocal Unité under the artistic direction of Christian Nadalet. A professional DVD of one of the concerts was made with subtitles in both English and French. It can be seen and heard here.

Bart continues to be recognized as a significant composer. In 2014, the Danish Royal Family commissioned Bart to compose and perform a song cycle based on the Prince Consort’s poetry. In 2015, Bart completed a Te Deum commissioned by the Catholic Church that will be premiered with an 80-voice choir on April 17, 2016, in the cathedral at Auch, France.

Interest in performing the completed oratorio, The Awakening of Humanity, has been expressed in both France and the United States. The orchestras and choruses, however, while willing to underwrite the performances, do not have the resources to commission the final four movements and its orchestrations. Bart and Monty need funding for a six-month period that can be entirely devoted to completing the work. They hope that patron support and participation in 2016 will allow them to complete the oratorio and schedule premiere performances in both the United States and France in 2017.

Without outside funding, Bart and I completed The Awakening of Humanity with six revisions that included reducing the oratorio from six to five movements. A 52-minute piano reduction with the Ensemble Vocal Unité was performed on June 2, 2019 in Toulouse, France as a world premiere. A music festival grant allowed for a professional DVD to be made of the concert. 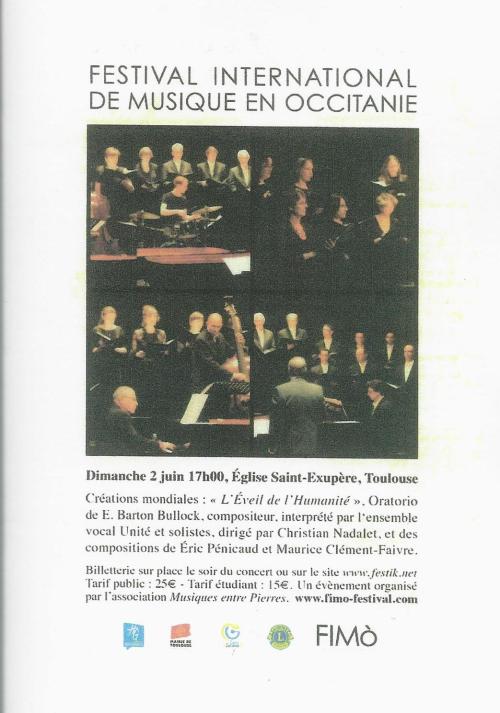 I did not receive a promised travel grant to attend the Toulouse concert and thus missed lecture invitations and hosting by the French supporters. Frankly, my repaired knees and hip would have made the transatlantic travel very painful.

Two world-class choral organizations—Vocal Essence in Minneapolis, MN and Bel Canto in Greensboro, NC—want to perform The Awakening with 100 voices and a symphony orchestra, but Bart needs financial support to compose the overture and the orchestrations. If Bart can complete this work in 2020, symphonic performances can be planned for the 2021-2022 concert season. I hope to limp on those stages in my 80th year.

We trust that the worldwide interest in The Awakening of Humanity will lead to the financial underwriting of it as a symphonic work.

When I discovered that I could actually write libretti for classical music, I spent a year each in writing operas adapted from two of my novels, Save the Good Seed (published) and Eagle Feathers in Glass (unpublished). I hope to collaborate on these two projects with American Indian composers. You may ask, why devote so much creative energy to an opera that would require millions of dollars to produce? I can only reply that the poetic challenge was irresistible and that the stories were too important.

6 responses to “The Celestine Prophecy Connection”